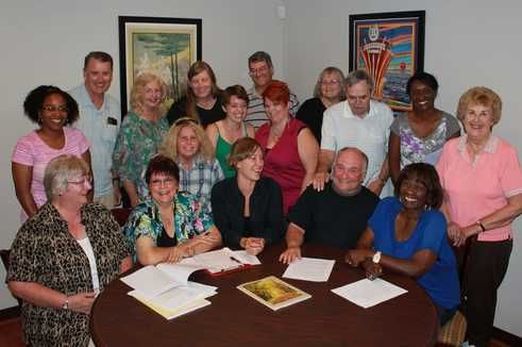 The history is a bit long -- but we have been around for a long time.

﻿HISTORY: For decades Indiana has been known for its grain and steel. Although the area is indeed proud of these contributions to the nation and the world, others need to also be aware that Indiana has even more to offer: its literary and writing talents.

It was because of the abundance of writing talent in the area and the magnitude of novice writers seeking help and encouragement, that Write-On, Hoosiers Inc. was founded in 1989 by Sharon Palmeri.

Palmeri, who holds a B.Sc. Degree in Education, English/journalism, has had a diverse background as freelance writer and poet, newspaper correspondent and licensed educator.

THE PAST In the past the media had been very supportive to the organization. W.O.H. had many interviews on radio, TV, and in local newspapers at which time the organization's goals were discussed.

﻿THE FUTURE﻿ We hope to plan and implement more mini-conferences, special speakers, and hope the media continues to support W.O.H. by announcing their events and accomplishments

﻿DONATIONS﻿ from the many dedicated members of Write-On, Hoosiers, Inc. and our outside supporters have been appreciated throughout the years. W.O.H. has indeed developed a heartbeat of its own that is growing stronger each year.